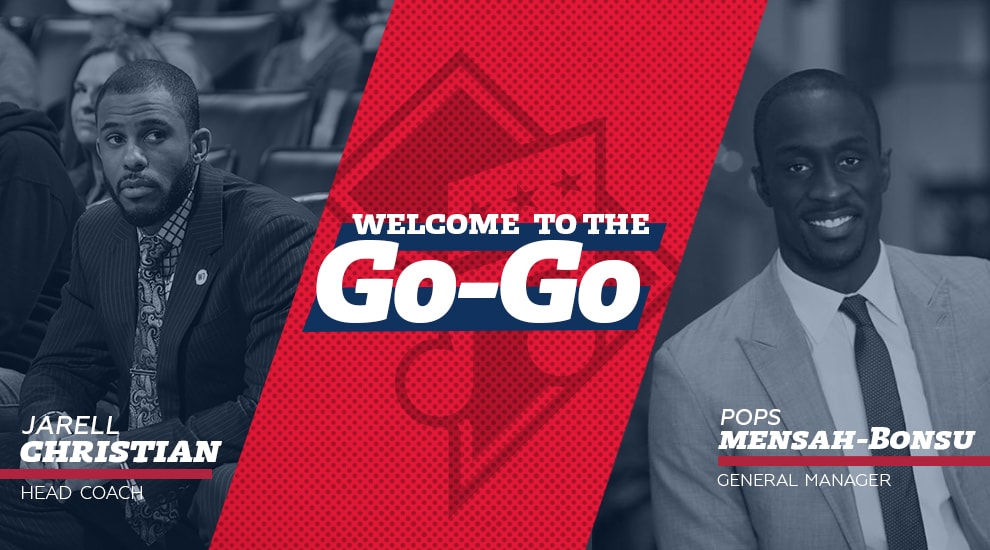 “We are very excited for the upcoming inaugural season for the Go-Go and are very pleased to have Pops and Jarell heading up the team’s basketball operations,” said Grunfeld.  “They come to us with outstanding experience and we’re confident that they will lead our efforts to develop both players and staff while establishing a presence in the Southeast D.C. community”

Mensah-Bonsu comes to Capital City with over 10 years of basketball experience as a player and scout, spending the last two seasons as a pro personnel scout with the San Antonio Spurs.  He returns to Washington, D.C., where he played four years at George Washington University and led the Colonials to two NCAA Tournament appearances. After going undrafted in the 2006 NBA Draft, Mensah-Bonsu signed with the Dallas Mavericks, spending the majority of the season with the Fort Wayne Flyers of the then-NBA Development League. Mensah-Bonsu played four years in the NBA with Dallas, San Antonio, Toronto, Houston and New Orleans while also spending time in the NBA D League and overseas before retiring in 2015. Born in London, Mensah-Bonsu also competed on the British Men’s National team during the 2012 London Olympics. Following his retirement in 2015, Mensah-Bonsu worked at the National Basketball Players Association as a regional representative and international liaison for NBA players.

“I am humbled to be entrusted with this position and would like to thank the Wizards organization for the opportunity,” said Mensah-Bonsu. “Washington is my second home and the city has embraced me ever since I stepped on the George Washington campus.  I am excited to be able to give back by making sure that the Go-Go is a pillar in the community and a team that the city can get behind.”

Christian has spent the last four seasons as an assistant coach on the staff of the Oklahoma City Blue of the G League.  In his four seasons with the Blue, he helped lead the team to three playoff appearances, including a second-round appearance in the 2016-17 season. Christian served as the interim head coach for the team at the end of the 2016 season when Head Coach Mark Daigneault joined the Thunder’s staff. Oklahoma City housed and developed current NBA players such as Cameron Payne (Chicago), Alex Caruso (LA Lakers) and Dakari Johnson (Memphis) during Christian’s tenure with the team.

“I am proud to represent the Wizards and the D.C. community, especially Ward 8, as we head into our inaugural season,” said Christian. “The organization has expressed their confidence in me to lead these young men at such an influential time in their careers and I am excited about doing so as a part of such a close-knit community. My family and I look forward to meeting the individuals that make D.C. such a special place.”

Christian attended Emory & Henry College in Emory, Virginia, where he played four seasons with the Wasps while earning a degree in sports management. Following his graduation, Christian spent one season at Tusculum College before returning to E&H as an assistant coach for the men’s basketball team (as well as the head coach for both the men’s and women’s cross-country teams). After two seasons at E&H, Christian moved on to another assistant role at Randolph Macon College in Virginia, where he spent two seasons on current Bucknell Head Coach Nathan Davis’ staff before moving on to the G League.

The Capital City Go-Go will play their 24 home games at a new, state-of-the-art venue on the campus of the former St. Elizabeths Hospital in Southeast Washington, which will also become home to all Washington Mystics’ games upon completion.  The complex will also include the MedStar Wizards Performance Center, where the Wizards will practice. The Go-Go will be the 27th member of the G League and the first affiliate team to be owned and operated by Monumental Sports & Entertainment.